Halloween is upon us. Check these ghost stories that aired on the radio a while back.

Remember: The monsters in your nightmares are real and there are things in the dark out to get you.
at 12:01 AM No comments:

A Fractured Reflection on the Comparative

The route is set and the exit will soon be upon me. I look forward to this trip but I am nervous. The miles will be hard. On the first leg, I will travel more miles in a day than I normally travel in two weeks. The weather will be cold and I don’t know what the cops are like in any of the states through which I will travel. I can’t help but be intimidated. It is strange to think that I am traveling only a fraction of the distance that the men and women known as Iron Butts travel. There are cats who have ridden across the 48 states in less than 10 days. And even now, somewhere in south America, Nick Sanders is trying beat the world record for fastest motorcycle trip around the world. And he’s riding the new R1, which is the least comfortable R1 that there is.
It isn’t strange to dread something that others encounter with relative ease. Some are more trained or experienced than others; it is only natural that tasks and possible experiences appear differently to us. But is there any use in the comparison? Is there anything that I can gain, any peace that I can find, from a contrast of experiences?
Humanitarians often return from sites of charity opining about their newfound appreciation for life. The natives do so much with so little, they say. I’ve learned so much about myself just from seeing how they live! In John Edward's famous sermon, Sinners in the Hands of an Angry God, the preacher tells the congregation that the enjoyment of heaven is amplified by the suffering of sinners in hell. And we all know why we should eat all of our food- there are children starving in Africa.
Maybe its more of a matter of mood than reasoning, but I find these moves kind of annoying. They give us a sense of location in the grand sphere of human experiences, but at the expense of the object of comparison. Lame humanitarians use the native sub-altern as the vehicle for their “life changing revelations.” Like, I know you are suffering and stuff, but imagine what your suffering has done for ME!  Fire and Brimstone-ish pastors talk shit about people who are in hell despite a theology that supposedly emphasizes compassion and forgiveness. People are burning alive; how is it okay to feel good about that? And the starving african child is just a construct to get me to eat my damn peas. I am not admonished to eat until I’m done, then go to Namibia and share the rest with the Nimba tribe. I am just supposed to clean my plate in a metaphorical act of hoarding resources away from the poor.
Yeah, Peter Singer excluded, comparative evaluation can be a jerky thing to engage in.  And it can also minimize one’s own experience of a thing. If you suffered a trauma, why should the fact that others suffered it bring you relief? Cioran says it best:


“Who can say with precision that my neighbor suffers more than I do or that Jesus suffered more than all of us? There is no objective standard because suffering cannot be measured according to the external stimulation or local irritation of the organism, but only as it is felt and reflected in consciousness. Alas, from this point of view, any hierarchy is out of the question. Each person remains with his own suffering, which he believes absolute and unlimited.”
There are serious costs for stifling your own pain under the greater pains of others. This I know. So maybe I should not deprecate myself because I find this trip daunting and there are others who do not. Maybe I should just find it daunting and get on with it. It’s nobody’s miserable journey but mine. And it starts in two days. Or thirty years ago. Whichever.
at 9:25 PM No comments:

The (Ragged) Edge of Exit. 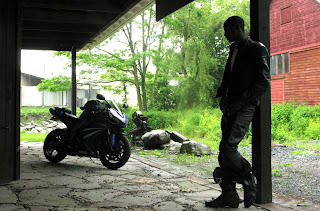 There are many reasons not to ride a sport bike over a long distance. The seating position is made for track riding and sets your body in a posture that cannot be held for long without tying your back in knots and crippling your knees and wrists. The low windshield protects you from nothing and the constant need to resist the wind causes fatigue. The sport bike’s suspension is comparatively hard when compared to, oh, any other type of bike on Earth, which means that all of the imperfections in a road are transfered through the body of the rider, which compounds all of the issues I have just mentioned. In addition, storage space is quite limited. Even with a tank bag, this is a ride on which you can’t take very much. And space is just as limited in the gas tank. Sport bikes get the worst gas mileage of any type of bike, so the trip involves having to stop to refuel much sooner and more often than other bikes. But hey, you’ll be stopping anyway, because you will be tired and your body will be in so much pain.
I know all of this. But this weekend, I will set off on a 1500 mile journey on none other than my R1, the Pharmacon Atlas.
It has been a while since I have seen my friends. And winter is coming to NYC, which is a time that I can’t do any meaningful riding. And I need to get away from this infernal city for a while anyway. And none of these reasons actually mean anything, because none of them motivate my desire to make the trip.
Saturday is the day.

In August of 2008, a traumatic event shook my homegirl Samara's whole status. She spoke with me about it. Here is the radio version.
at 1:31 AM 1 comment:

"I am not without scars on my brain and my body, but I can live with them. I still feel a shudder in my spine every time I see a Vincent Black Shadow, or when I walk into a public restroom and hear crippled men whispering about the terrifying Kawasaki Triple…. I have visions of compound femur-fractures and large black men in white hospital suits holding me down on a gurney while a nurse called “Bess” sews the flaps of my scalp together with a stitching drill.

Ho, ho. Thank God for these flashbacks. The brain is such a wonderful instrument (until God sinks his teeth into it). Some people hear Tiny Tim singing when they go under, and others hear the song of the Sausage Creature."

A couple years ago, a friend of mine was raped at gunpoint in an elevator. After a time, the rapist was caught and his case went to trial. He was accused of assaulting three women. The weight of the testimony against him and the DNA evidence brought down a guilty verdict on all counts. At the day of his sentencing, his victims were given a chance to give statements. My homegirl rose to the status and addressed him personally. This is the letter she read to her rapist.

Riders in the Storm: Chapter Two.

The Story of the Sunday Ride.

The rain beat down upon the world as a group of weary travelers hid away in the roadside tavern. In a dim corner, two riders sat attentive as the rider with the white helmet began a story about a mishap of a sunday ride: 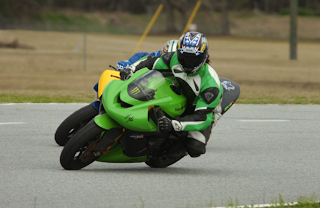 The Green Ninja Speaks to the Students about the Metaphor of God's Motorcycle.
at 1:42 AM No comments:

The Phenomenology of Motorcycling 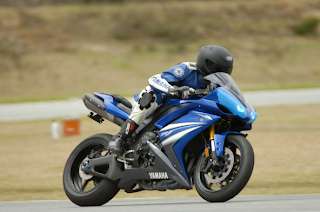 This is a paper I gave at a conference on motorcycles. Listen at your peril.
at 12:00 PM No comments:

Riders in the Storm: Chapter One. The Story of a Chance Meeting.

“I never got into the social part of motorcycling,” said the man with the black helmet.  “I never went to meetups or went on group rides. Hell, I don’t even wave back when I get the rider’s salute on the road. The bike to me was always a way to be alone, like taking a boat out to sea or going on a long walk through the woods.
One night I had been riding for hours. Things were going really wrong in my life and I didn’t want to go home. I feel that way a lot. So on this night, I was in the mountains. It is stupid to ride up there at night, much less when you are upset about something. But I didn’t care. I rode past deer and against strong gusts of wind, until I came to a lookout point with a view of the valley. I had been there many times before, but this was the first time I wasn’t there alone. A man stood by the brick railing, looking out and smoking a cigarette. He didn’t look back when he was lit up by my headlights. Didn’t look back when I walked up beside him. Gave me the impression that he wanted to be alone and that suited me just fine. I walked to the other end of the lookout and pulled out a cigarette. But my lighter was gone.

Email ThisBlogThis!Share to TwitterShare to FacebookShare to Pinterest
Labels: Fiction
Newer Posts Older Posts Home
Subscribe to: Posts (Atom)
This is a blog of mostly moto-centric existential reflections. There is also some audio from my radio stylings, quoted passages from literature and rap music and perspectives on Africana thought. Ride with me.