Riders in the Storm: Chapter Three 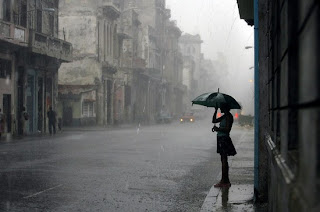 The Story of a Lost Love. Part One.
The people of the pub continued to speak and drink, though in the darkness of the power outage each clanked glass and raised voice seemed more percussive. In the dark the tavern suddenly seemed hollow, like a wooden barrel cast over a waterfall. Wielding flashlights, the wait staff carefully made their rounds. Even if the world had stopped, the alcohol would still flow.


In the corner, the riders sat listening to the clamor. A windup radio on the bar offered familiar news. The storm was not yet done and its rage had cut power to many districts in its path. There was nothing to do but wait.


In the corner two riders sat quietly while another went outside to check on the bikes. He returned drenched and was handed a towel and a cold bottle when he sat down. Together the men drank and waited for the beginning of the next story.


In the dark, they could not see the expression on the face of the man with the green helmet. In the dark they could not feel the weight of a story that he had never told. But an untold tale is a burden on every heart and before long the silence at the biker’s table was broken.


“If the devil isn’t real then I don’t know who I sold my soul to. All I know is forty miles was the distance I had to travel to get it back.” The rider with the green helmet paused, unsure of how to start a deeply personal tale. He began again.


“Not everyone knows the moment when they fell from grace. It is hard enough to know what path you are on at all, much less the circumstances that caused you to stray. Moments that seem to have no connection when you’re living through them form a terrible pattern through the lens of retrospection.”


The men at the table listened as the man with the green helmet told them about a woman. He met her long ago and spent a good stretch admiring her from afar. They were friends, but at his core of styles he knew that she would have a greater meaning in his life. Before long, they were together and had figured this to be the truth of their lives. He loved her.


The riders understood the importance of the call to love, but one of them wanted to know why he loved her so. What was it about her that quenched his desire for love? The rider with the green helmet explained that there are no real answers to such a question. People speak of the qualities of their beloved, of her eyes or her smile or her kindness. But qualities are not reasons. They are just what we have in the place of reasons. Even the divinely inspired Song of Solomon is a mere list of tired similes and metaphors that justify nothing. The man in love rambles platitudes that can never express the content of his love. For love cannot be explained nor can it be proved.


The rider lived with his love for many years. When she slept, he watched her and cried. When she danced, he wondered how a single soul could brighten so much darkness. She was the only truth that he had ever known. But knowledge comes at a price.


“People talk about how they are made for each other,” said the rider, “about how they are soul mates. This is blind stupid romanticism. No, the parts that compose our bikes were engineered to fit together, to work in unison. There is no such grand design for a human relationship. To be with someone is to constantly adjust yourself, to overcome your habits and revise your commitments. A refusal to change is a sentence to solitude. Yet changing too much can be your own personal defeat, or just a sign that your one and only has become one of many.”


So it was with he and his beloved. Given enough time, the slightest arc in a straight line can create a perfect circle. And the smallest flaw can develop into an opaque blemish, unnoticeable until it sediments and cannot be wiped away. The rider could no longer understand his life with his beloved and he broke it off and fled from her.


“People say that it is better to have loved and lost than never to have loved. But only the people who survive the loss are able to say this. The dead and the dying know differently and if we could hear their lament the lyrics of a million songs and poems might be much different than what they are now.”


The rider carried his moments into months. Into years into decades. He sought knowledge, success and adventure. He would not say of his life that it was a vanity of vanities or that he was striving after wind. He experienced joy and frustration. A life worthy of a work of art. But in the night, when the minds of men wander without care for consequences, he thought of her. And in those moments the vastness of years past seemed dull. He had never replaced her. He closed up a part of himself that could have no entrant but one and in doing so, he closed off all chances of happiness. But he always held out hope for the promise.


It was a claim made in love and resignation. Since people grow apart they can also grow back together. Perhaps when Saturn descends or when they each cross a great life milestone. He told her that he might come for her again one day. He wanted to know if she would accept him should such a day come. She said that yes, she would. The future was an open possibility and she would always be open to him. It was never too late to be at home.


In the dark hours of his life, this was the only thought in which the rider with the green helmet took comfort. He and his bike travelled many roads, some of which were unmapped. But he never crossed a trail that wouldn’t lead back to her.


It was inevitable then, that their paths would cross once more. On a ride to a faraway place the rider encountered a mutual friend. She was surprised and happy to see him in a diner at the edge of nowhere. They spoke on the trivialities of history until they approached the only subject about which the rider cared. How was she doing?


She told him that his old love was set to go away, perhaps a far away as a person can travel without going round the curve of Earth and coming back again. That she would be gone for many years if not forever. His old love had grown dissatisfied with her city and her life path, so she was starting a radical shift.


He asked when it was that she was leaving; perhaps he could push past the awkwardness and disappointment to wish her well and reflect one last time on the joys of the past. He learned that her exit was immanent, that even now she was headed to a small airport in the next state. Her exodus from all she knew was not even two hours away.


The rider sat for a moment considering this news. From the third, any who saw him would say that he sat at the table of the diner for only a few minutes after his friend said her goodbyes. But on the inside, dawn had turned to twilight. At last he understood the meaning of what he had given up. He felt the weight of his foolishness and he remembered the promise. Then he grabbed his helmet. The airport was 40 miles away.