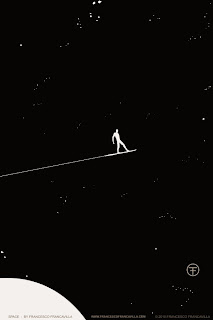 In the pantheon of Marvel Comics characters is a dude called the Silver Surfer. He is an immeasurably powerful cosmic entity that cruises through outer space on a surf board. From his earliest appearance in comic books, he was a reflective soul; he struggled to understand the hopes and cruelties of human beings, as well as the other sentience in his fictional universe. Though he could travel anywhere in the bounded infinity of time and space, his most important explorations were internal. Such a dedication to wandering self-reflection makes me think that, were he a mere man, the Silver Surfer would ride a bike. Sometimes the road feels so hostile and alienating that I wonder if my ride is any different from drifting without gravity or understanding in some silent void. It is not a feeling that happens often, but there are moments when I feel so far from home that I don’t know if I will ever get back. There is nothing I can do in that abyss but hold the throttle steady and hope that I can return. Still, sometimes I wonder what has changed more at the end of a long journey- the traveller or home itself. I doubt that even the Surfer can call it.
at 12:46 AM

Email ThisBlogThis!Share to TwitterShare to FacebookShare to Pinterest
Labels: Despair