Hegel and Helmets. Part One. 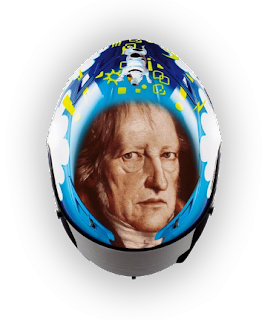 A long time ago a currently dead german took a look at history and came up with a story that strung everything together. He drafted a picture of the world across time where everything fit to perfection. He found a target toward which history was headed and demonstrated the deep necessity of this path. It was an enlightenment story, quite optimistic in many ways. And those who followed or rebelled against this style blazed a fire across the whole world.
There aren’t many disciples of this great theory today, at least not like there used to be. But there are remainders. Bits and pieces of his perspective have been converted into lenses, through which we can refract a critical gaze. I own a set of those glasses. Let’s have a look at motorcycle safety.
Human beings are unique, so the story goes, in that they can seek out the possibility of harm for no reason. We can risk our lives, not because we must in order to avert a greater danger, but because we think it would be a fun thing to do. I can jump out of an airplane, climb a rocky mountain side, or challenge Aaron Burr to a duel. I might do it for honor or simple exhilaration. Either way, the beasts of the field won’t empathize.
Mostly, though, we make moves against bodily danger and toward security. Almost every feature of modern life is based on this principle. I mean, you can never have enough airbags in a minivan.
But some of us still like to make a small concession from time to time. We will play an incredibly physical sport with a high probability of injury. Or, as in my case, we will choose a method of transport whose excitement is tempered by exposure to the elements of nature and the carelessness of those protected by front and side airbags.
Now, very few choose danger in the hope of injury or death. The Samurai class was abolished long ago and there have not been eager replacements for that code. So most of use rock precautions. Like safety lines and gear. And helmets.
Now, the dead german said that all of history is in fact one big story about human beings and their path to proper freedom. Every civilization, every conflict, every world historical event produces yet another piece in the puzzle that will yield humankind’s greatest reward. There are false starts and regressions, but the movement, the dialectic, completes itself and this completion is a new kind of awareness, a kind of self-consciousness on a world level. It’s Freedom baby. It’s the Absolute.
The vehicle of this movement is the human quest for authority and the inevitability of contradiction. When a human being finds a possible answer, so the story goes, she will seek to affirm for herself that this is in fact the right answer. It may take a while, but the affirmation will eventually show its flaws and we will be thrust once again into a search for the right way to be, for the right expression and exercise of our freedom.
But we will be wrong about our expression most of the time. We will think that we are completely free through hedonistic pursuits, only to learn that we have become enslaved by the whims of our base desires. Or we find freedom in following our hearts, the deep passions that make us who we are, only to learn that those passions themselves are the contingent deposits of a life history that we can neither understand nor justify through reason. Or, to pick up our theme, we can choose not to wear motorcycle helmets. Let us examine the failures of this moto dialectic.
Continued…
at 10:24 PM No comments:

On Love and Other Question Marks. 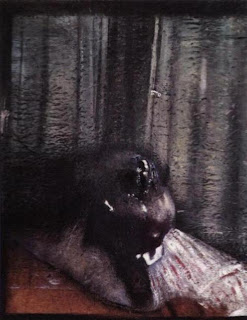 I don't really know how to describe this one. It is a kind of fractured meditation, I suppose. Maybe a bit more artsy or free styled than I would normally put down. The main track is from the Orange Ninja. The music at the end is the great Killah Priest.

The Voice Project is a non-profit operation that funnels cash to various humanitarian outfits in northern Uganda. It derives its flow from donations made by viewers who peep the music the Voice Project posts to its site. Some of the organizations it supports are questionable, as are many elements of the the humanitarian discourse in general.

But I just peeped a post that features many levels of awesome and thought it was worth a repost. Here DJ Spooky and a Cellist of great skill named Joshua Roman throw down on a Radiohead cover. As near as can be told, Spooky has rendered his take of the song entirely on an ipad. Heidegger can criticize technology all he wants (if that's what he was even doing in that impenetrable essay), but if artificial sounds of metallic hipster machinery can mix this well with the resonance of wood and string, then I welcome the "darkening of the world" through tech.

If you care about the problems of northern Ugandans, give money to these cats.

If you want to educate me on Heidegger and tech, read this and get back to me. Please.
at 2:49 PM No comments:

Okiedoke #3: Gary and the Watermelon

This (The guy speaking in the recording, not the man in the picture) is my man Gary. For the purposes of this tale, it is important to know that he is black. Whenever the introduction to a story is a disclosure of racial identity, you know you're about to hear about some ol' bullshit. 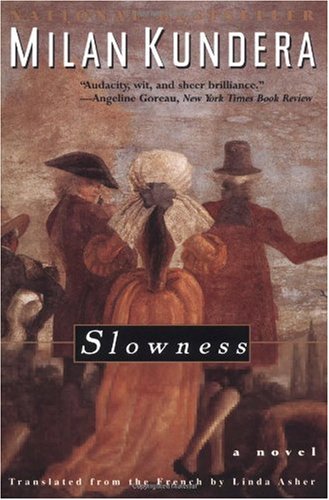 "The man hunched over his motorcycle can focus only on the present instant of his flight; he is caught in a fragment of time cut off from both the past and the future; he is wrenched from the continuity of time; he is outside of time; in other words, he is in a state of ecstasy; in that state he is unaware of his age, his wife, his children, his worries, and so he has no fear, because the source of fear is the future, and a person freed of the future has nothing to fear.

Speed is the form of ecstasy the technical revolution bestowed on man. As opposed to a motorcyclist, the runner is always present in his body, forever required to think about his blisters, his exhaustion; when he runs he feels his weight, his age, more conscious than ever of himself and of his time of life. This all changes when a man delegates the faculty of speed to a machine; from then on, his own body is outside the process, and he gives over to a speed that is noncorporeal, nonmaterial, pure speed, speed itself, ecstasy speed."
-From Slowness, by Milan Kundera
at 11:40 PM No comments: