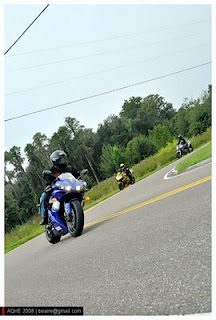 The movements of the day have been accented by a slow soreness in the few muscles that drape over my bones. This morning, I got out of bed slowly, stretching my back and neck before I leaving the futon. (Springing out of bed on some “what a loving morning, yay!” is for suckers anyway.) These are the echoes of the moderate beating my body has taken on two wheels this past week. Last Saturday I pre-empted my usual book reading, npr-listening, audio editing style for a right proper adventure on two wheels. I met a squad of riders off the highway and off we went, destined for 150 miles of awesomeness. The ride began awkwardly, what with the boy scouts, cops, and fog. But once we hit those little traveled county roads, things began to settle into the asphalt ridden beauty that is the crotch rocket’s birthright.

Nietzsche tells us that at times it is necessary to philosophize with a hammer. Break a thing to find out what it is. Or strike it to check for an echo, semblance of depth. On a downshift the engine screamed, as if it was surprised that I was headed to this corner at this speed. The vibration from the engine and the feel of the road travelled through the tires, to the frame, to my hands which braced my body against the downward force of braking. Yeah, I thought. This is how you philosophize with a tuning fork.

We take in the world from a body. If I were to talk about organs and motor-neurons it would only miss the point. For then I would be casting those parts into the world that we take in. The body simply is the place from which we move, from which we perceive, from which we act. So, on this day, my body was simply a few hundred pounds heavier, full of coolant, gasoline and oil, a vibrating mass moving down a series of winding roads that, really, were also me.

Concentration was the meaning of the style. Accelerate. Downshift. Break. Look. Lean. Maintain the line. Scan for road imperfections and cops. Try not to miss the next turn. Try not to get left by the homies up ahead with off brand bikes and more experience of these roads. But always, without warning, from the frenetic mix of road, wind, and traction, there emerged a clearing. A slight hill would finally descend, revealing acres of farmland, lush green fields symmetrically cut into the countryside. Cows lied down in the shade. Horses would not even look up from their graze. (They started this horsepower thing, after all. No need to revere their passing imitators.)

In the vast expanse. I saw all expanses. The farmland of my home in Alabama. The coastal greenery of Devon. The tips of the pine trees in the mountains outside Las Vegas. The tropical bush of the West Nile Valley. I wondered about my friends and wished that they could all soak in the world from this side of the double yellow lines. Then a long straightaway unfolded before us. The low groan of an Italian machine intensified in front of me. I figured there is no way in hell I would let it get away. And this is why my shoulders are sore, even now.

The moto homies meet again tomorrow morning. I will be heavier again and the unreal peace of a county road will wash over me. Well, at least until I see "McCain" on a bumper sticker. 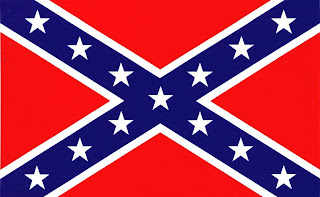 ... A difference, i think, between the sight of that swastika and the confederate style is that the swastika, from here, sits fully in its historical significance. People know exactly what it means and who it represented. Especially the Europeans, the Jewish homies, the Gypsies, the Poles. If they see it on a street corner today, they can rest assured that the cats waving it are on that racist bullshit. But a new form emerges with the so called battle flag. Those who wave it reject any racist connotation, in public at least. And this is annoying because all brown people in the south know that the bumper sticker means "unfriendly to negroes." They know it. And the cats with the stickers know that they know it.

Yet cats are brought up in places that are imbued with world meanings long before they even get the gift of language. So a white kid that has no investment in racism, no resentment for non-white people, nevertheless comes up in the world of the dukes of hazzard, shotguns and hee haw. But this is the thing: I did too. Exactly the same place, just one neighborhood over. So these signs are part of my landscape and i move from baby to kid to teen just taking it all in. But then I get to high school where I finally learn a bit about the civil war. And I am like, whaaat? Those guys did what? And the totality of the war means nothing, i am rapt with just one detail. The fate of the brown people. Suddenly I look around and realize that I am attending Robert E. Lee High School. My homeboy goes to Nathan Forrest High. My other homie goes to Andrew Jackson. And then I feel the resentment, because my whole world is littered with icons of cats who hated me. Or didn't think enough of me to hate me. Not that the whole history of America is any different, but it is the veneration that I can't stand. They love these people as heroes. And I am like, heroes? You want the heroes here with you if possible. I don't want Nathan Forrest here with me. I don't want that name on my diploma.

So my world shifts. This knowledge sours the icons of my environment. And a neighborhood over, none of this means anything to my white counterpart. He learns about southern hospitality and the might of the confederacy. And these cats are his heroes. Then he gets all mad when I push the reminder. But I am all mad at his mode of existence. Which is pretty much the history of race relations in america anyway. Both of us are selective about the legacy. He picks out a lush forrest. But I don't see the beauty because there are hunters among the trees whose muskets are trained on me. And they are all I can see. Why can't he see them? Why can't he ... oh no, he just put the decal on his bumper.

Thus, I grow up suspicious of all grand claims to honor, goodness and fairness in the men of history. a neighborhood over, he grows up suspicious of me. The feeling is mutual. Across town, there are black kids playing in front of a statue of robert e lee. Little versions of me who will soon awaken to the hot mess that is the american racial landscape. The landscape is a bit like the statue itself: it may tarnish but it ain't moving. Lucky for us, we can check it from many different angles. Stand with me and look at it from here. I'll do the same for you.


Note: Thanks to the gangster Lea for pulling these thoughts out me.
at 3:33 AM 4 comments: 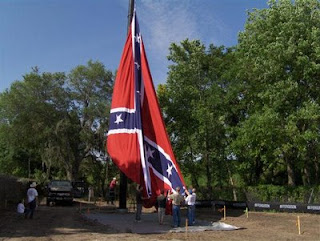 The Confederate Flag. The one above now flies proudly near tampa, fl. well, it would fly if it were not so heavy. Or limp. Maybe limp is the word.

I love to question cats about it. I mean, I am a philosopher and everything, questions are what I do. But I find that cats are quite resistant when it comes to the flag and would just as soon accuse me of some fanciful reverse discrimination as engage at the level of questions. So I have taken to pointing out a few facts of history.

The clown who claims "heritage, not hate" tends not to know any of this. They are then at a brief loss for words. That is when I get all ideological.

You say it is about heritage, but you don't know the full extent of this heritage, i say. I wonder if you can ever pick out any of the official flags of the CSA? It is cool to be down for states rights, i know. But one of the principle rights you wanted to protect was slave ownership. And by you, I mean the rich, landowning greedy people who swayed you into the war. But whatever, you lost the war, and it was so decisive that your enemy doesnt even exist anymore. People in the north, today, have no idea what a yankee is other than a member of a baseball team. I have students from the north who come down here and don't even understand what that flag means. But you clowns are over here talkin bout "the south will rise again." Rise against what? No, all that your belligerent flag display is about is the mourning of some imaginary lost glory. It is resentment over defeat. It is that same resentment that led your claimed ancestors to draft jim crow legislation. Which brings us to the issue of "not hate." Fact is, the defining marker of 'negroes ain't welcome' in any establishment is the presence of that flag. Put it on the signpost at a bar and magically it becomes a "whites only" bar. The one time in my life where i was attacked unprovoked by a a group of white men (well, other than every minute of my life), confederate flags graced the vehicles on which my instant enemies were chillin'. Now why do you think that is? Maybe my skin color was its own provocation.

But whatever, i know that you personally don't hate non-white southern people. You watch football after all. That's probably why you added "not hate" to the slogan in the first place. No, you just want to remind people who couldn't care less that you're still mad about a war that, had you won, would have allowed those of you that owned slaves to keep them. Oh, and it looks pretty sweet on top of an orange dodge charger. I feel you.

The south is my heritage too, by the way. I was born in a southern city where a massive bus boycott went down. A city where cats were beat down with water hoses and dogs in the streets. A city where a cat who now has a holiday named for him was arrested for parading without a permit when really, he was protesting the idea that people should be forced to drink the same water out of different fountains. When you think about it, these events were part of a kind of intra-southern civil war. Maybe I would fly a flag for this if there was one. But in absence of that, I just hold fast to the ideas that such a flag would represent. If you do the same for your flag, that might mean that you wish that boycott and related protests went differently than they did. In that case, I'm worried about our future together. But it's cool. At the end of days, my flag is just a fictional as yours.


Addendum: Hope i didn't straw man anybody. Just trying to get you to feel my status. Cause when I see that flag off I-75 I certainly feel yours.
at 6:04 PM No comments: