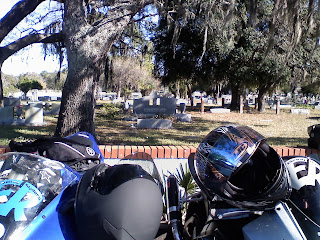 It is dark out. Fully aimless, I step into the driveway. I put on ear plugs, then my helmet. The new lid is a non-reflective matte black. Even at its cleanest, I can’t see a distorted reflection of myself in its curved surface. Geared up, I turn on the machine and press a small grey button next to the throttle. The engine coughs, then explodes into a cascade of harmonies. In its core there is oil and gasoline coming together in measured doses around a block of metal that was bent into its telos by the hands of cats I don’t know. The machine sucks in air and exhales. It grumbles and grunts and I wrap my legs around it because I want an exit, though I have no entrance plans. I roll out onto the streets and the metal beneath me gets hotter. After a few traffic lights the tires do the same and tell me, somehow, that they are ready for whatever I can give them. I am the first to the ramp after the light so I freely lean into the turn as it elevates to the interstate. The front tire slides on a strange patch of concrete near the exit of the turn. It jolts me a bit, but I knew it was there, so the jolt is not based in fear. It is amazing, the difference a little knowledge can make.

Minutes later I am at the strip. I forgot it is the weekend. The clubs are in effect. I coast to the parking spot among the other bikes. Well dressed people walk by, headed to clubs and other nightspots. A barely dressed woman in a group jokingly asks me for a ride.

As I put hot sauce on my snacks I think about the attraction of two wheels. The bike, to me, is bit of a compulsion. A desire that is in not experienced as a desire. I don't want it. I just need it, as Maynard says. Recently, I have reached a point where, in order to develop my skills further, I need once again the safety of a racetrack. But that day is still far off. So I long for it like it is my beloved. Which it is, I suppose. An experience of danger, intensity and pleasure for which there is no equal and no substitute. Other than these tacos, of course.

On another day I meet the homies and ride to a global meeting spot. We roll onto a lot where hundreds of riders wait. Recently, a rider has been killed and we have gathered to mourn his loss with a ride. Soon, the gathering rolls out. On the road, the caravan stretches so far ahead that my passenger and I cannot see its beginning. More than two hundred strong, we brazenly stop traffic and run red lights. The police can do nothing. We put kickstands down on a service road in front of a grave yard. It is at a small intersection across from the graves that this rider was killed. A collision with another vehicle threw him off the machine, smashing his unhelmeted dome into the ground. It hurts me to learn that he was unprotected. It hadn’t rained since the accident. We could still see his blood on the pavement.

We gather across from this spot. A close friend of his speaks about the loss. The loss of a brother, he says. I think about this. So many of my friends have lost brothers. Or come horribly close. A moment of silence or nostalgia could never last as long as these cats deserve. And I could never cultivate enough fellow feeling to swim the depth of the families that survived them. The friend says a prayer and we head back to the bikes. I walk beside gravestones and acknowledge the danger of two wheels. Not like I always do. I don’t recognize the possibility. Rather, I feel the inevitability. And the only thing stronger than this feeling is my desire to ride.

In the days after I feel disjointed. I have a lot of work to do and ideas do not come easily. These text files need more sentences. This audio needs a few more cuts. I step out into the driveway and press a little grey button. The machine coughs, then explodes into a cascade of harmonies. Maybe I like the bike so much because it allows me to be the aimless cat that I am. It rewards me for it by introducing me to new roads and scenery. It’s risky and intense and the its feelings have no equal and no substitute. I hope that I will be doing this for a long time.
at 3:56 AM 1 comment:

I hear a lot about resolutions and pledges. Perhaps their most dramatic form is that of the conversion experience. The light breaks upon Martin Luther. Peter Parker’s Uncle Ben is killed by a criminal that Peter let escape. Siddharta realizes the 4 noble truths one fateful day in a park. A moment moves and we are forever changed. Now we are the emissaries of God or Justice or Nothingness, as it were. We have hit the other side. On occasion the supposed new status is a result of something far less divine or providential: the force of will. “This time I have made up my mind. This time I’m back on my grind.” Yeah. “I know there’s things in my life that ahma let go, starting tonight.” Perhaps there are statuses that render so cleanly. I don’t know. But I think that for most, and certainly for me, the pivotal turn has a pace more like the whimpering death of resolve than it’s sudden birth.

I want it to be the case that I return from my vision quest fully formed as a man, or that at the signing of the proclamation I get my freedom. But I have come back around to the same status far too many times to be that naive. There are heavy and rusted anchors that hold me to the oldness that I want so desperately to release. And the chain that binds me is elastic. I run at full speed for a great distance along the surface only to inch forward in the murky and deterministic depth. My claims of newness are betrayed when that band snaps back. The convert can feel the backslide coming and yet has already accepted it. I should not be doing this, I think, but I put the night or the bike or the thought on exactly the path that has led to this familiar turn. And when the familiar feels good there is no hope for authenticity. In my surrendering I close of the possibility of resoluteness. It is not a contradiction to be bound so securely and yet be so lost.

Still, the earth is curved and a road traveled long enough can still result in a complete inversion. Or imbue deep meaning to the most basic acts. Like a hair cut. Or a kiss. Or the reading of a long sentence.
Maybe what we call conversion is just the arbitrary selection of a single moment out of the agonizing movement with which I am struggling; A description that looks good in print but hides the world it purports to reveal. Because the world turns, baby. My life has not come to this. Rather, my life is a continual coming to this-ness. You can earmark that book if you wanna, but the words keep changing and it ain’t no page numbers no way.

One day a while back I checked myself for a belief in a supreme being, like God or something, only to discover that that light had quietly gone out. Like an already dim flame from a candle at the end of its wick. I tapered into a new status like a long song fades into silence. Perhaps endings and beginnings are matters of degrees.