A class that I was in once got swept up in a discussion about journalism and history. Some of us students were growing frustrated at the idea being discussed, that the way one chooses to write history is itself a confession of one’s theoretical or narrative commitments. One among us asked: but what about the brute fact that on some day in 1492 Columbus put his foot on some sand in a particular place. I mean, that is just a fact, I don’t have to have some ulterior motive to put that down. Yeah, sure, said the professor, there do appear to be facts. It does seem that things happened or didn't happen. But if there are facts, there are an infinite number of them. And you picking one event out of that abyss already shows your preferences for a particular kind of narrative, it indicates the kinds of commitments you have as a writer of history, maybe commitments that you don’t even know you have.

This classroom conversation comes to me now, as this great machine moves at speed over darkness and liquid. My thoughts keep me from joining the great sleep that has come over the cabin. Thoughts of the coming semester and its challenges. Thoughts of my bike, tucked away in the shed, awaiting my return. And Thoughts of history. Or at least the perspectives that give it form.
It is rare that one is greeted on a new scene by a blooming, buzzing confusion. The new world is given order by our desires and concerns. Or our receptivity to desires and concerns. And so it goes with the reports that we send back up to the ether. It’s not a new idea. It’s just sticking with me because I am stuck in a window seat and the last time I was in Uganda I stood alongside people who struck narratives out of facts that I would simply pass over. Or rocked interpretations of those facts that simply would not make a booty shake. (You see how I’m talking about “facts” like they’re unproblematic? Bad philosopher.) This is pretty much how it is everywhere unless one has a deeply homogenous and therefore boring circle of friends. But the thought is sitting heavy for some reason. There is apprehension.

I could use a bike ride right about now. Guess I gotta settle for watching a bike race.
at 2:18 AM 1 comment:

On the Edge of Exit 2

Two days from now the homies will drop me off at the local airport. From there I will start a small journey that will conclude in Northern Uganda perhaps two days later. I will roll up to a spot that I have thought about often, to friends and problems that have been with me since I first met them. But I have to get there first. I have some long layovers in countries to which I have never been. And I must once again revisit a tedious stretch of the Great North Road before I can put down my backpack for the month that I will be gone. The great gauntlet that is transcontinental travel used to be much longer and more difficult than trains and airplanes and well suspended cars make things. But I still feel a bit intimidated by the trek.

At the end of the road is Atiak, where Rachel, Olivia and the traditional birth attendants that are the focus of Earth Birth are hard at work. I will join them in their labor and record their styles. I will also think about the vagaries of colonialism and religion.

In a way, I mourn the mythical preconceptions I brought with me to Africa on my first trip. That sense of wonder was a small sustenance during my travels. But my perhaps typical yearning for the non-western authenticity of the Motherland died slowly when I was last on that scene. I fly now with other assumptions and ideals, certainly. But they are not as transparent or hopeful. Philosophically, it is a style that I prefer. It adds more darkness to the sky, but lets me better attend to the stars that will be burning around me. 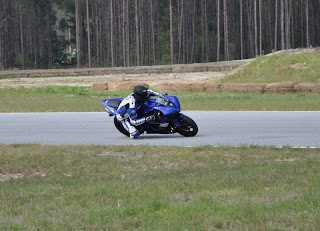 "I can't be fucked up with all that." This was my response to the question of whether i would enter the mock race happening in a few sessions. I was talking with a homie as he chilled under his tarp between his GSXR and his girlfriend. We were a few sessions into our track day at Jennings GP, my first track day with the R1, and it just didn't make sense for me to get on a starting grid with a squad of fast cats set on being the first to the bottleneck of turn 1. So far my lap times were just not that serious and anyway my bike was kind of broken. The linkage that connected the shift lever to the gearbox had snapped in two. I couldn't use the lever to shift, which effectively locked the transmission into 3rd gear. This was a fine gear in which to run the track, but starting from a dead stop on a crowded field in third gear seemed ridiculous.

On the other hand, it was perfectly good track time. And there was no rule saying that I had to race anybody. I could simply trail behind and do the same time attacks I had been doing. The race consisted of more laps than a normal session usually allows. To keep it as close to a regular session as possible, I could simply come into the pits early. That way, i could be free of the mania of trying to hit the finish line in front of somebody. i talked it over with the Green Ninja. He agreed with the plan and resolved to make it his own. And this is how we got ourselves on the grid.

It is called a mock race only because it is not official. A race license is not required, nor is membership in a racing league. These absences of formality take nothing away from the fact that one may pass on the inside line and the first person across the finish line can consider him or herself the winner. Ignoring this context, the Green Ninja and I departed from the pits and began our warm-up lap.

The Jennings GP track is 2.1 miles long, consisting of 14 turns, mostly lefts. Most corners have a lot of soft, grassy runoff for the bike and body of anyone who doesn't get a turn quite right. Track officials are posted all over keeping watch, ready to raise flags that communicate particular messages to riders on the track, such as 'caution, debris up ahead' or 'last lap before pitting in' or 'your bike is leaking shit, get off the track immediately'. In addition, there are control riders, experts who ride on the track at all times monitoring other riders and keeping pace. Such measures keep the place as safe as a racetrack can be. Only non-riders look upon the "speed limit, 180mph" sign with dread.

Bikes like mine were developed and tested on a track such as this. They were literally made to race; they wouldn't have headlights or turn signals if not for the Department of Transportation. So when I ended the warm up lap on the starting grid alongside other riders, engines revving, heads down, I felt myself in that continuum of development. Like I was a sentence in a great treatise on speed, technology and desire. Then came the green flag.

I twisted the throttle, let off the clutch and inch slowly forward like a reluctant swimmer inching toward cold water. I had forgotten that I was in third gear. I wouldn't have any speed at all for a few thousand more rpm. Immediately, I was passed on all side by a bunch of bikes. By the first corner, a fast left-hander, I was the last bike in the race. Half-way through the turn, i hit the power band and picked up speed. That's when I forgot.

And this is what I did. I stalked cats, following them closely before coming around them and beating them to a turn. Perhaps they were not really trying to compete or were just slow. Perhaps they were sticking to the plan that I laid out for myself before this race began. It doesn't matter. Those bastards had to get passed. On the last turn before the front straight, i came around a black ninja and leaned right. At the apex of the turn I felt a vibration in my knee and heard an abrasive sound. It took me a moment to realize that it was the sound of the knee puck attached to my leathers as it scraped the ground. Aw shit, I thought. This thang done got serious.

I finished the race having passed three riders. The Green Ninja had passed more than that, since he began the race behind me and finished third overall. A podium finish. He had gone through the same transformation that I had. The Anarchist reported that we both had run our fastest times of the day so far. And were ready to it again.

It is interesting to me, the things that changed when I accepted the telos of the race. The meaning of the track and its riders changed for me. The caution that prevented me from passing people or drastically increasing speed dissolved. I still cared about these things, but they were tempered by my desire to get ahead. And that desire, or the way it changed the meaning of my world, made me faster. I now have much reflecting to do on the phenomenology of competition.

The next time I hit the track, i will have race tires and medical insurance.
at 8:09 PM No comments: