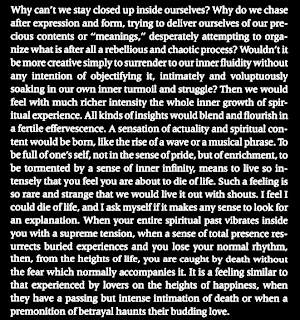 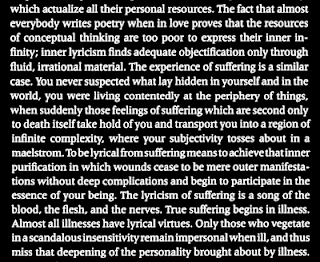 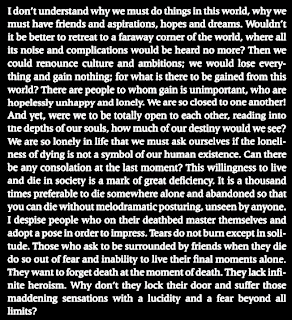 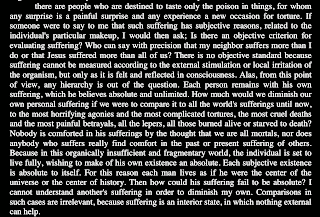 From E.M. Cioran's On the Heights of Despair. It was the feelgood book of 1934.

Waiting for the Races 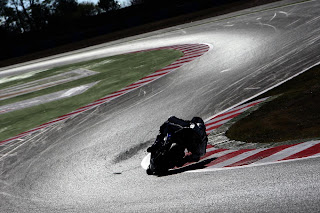 I spent a long chunk of life miffed at the notion of allegiance to a sports team. Thousands of fans screaming across a playing field, each burning with desire for a particular group of guys to run a ball into whatever place the other group of guys would like it to not be? Why did such a feeling arise in people? Perhaps it was an echo of the battlefield, a homie suggested to me once. Back when the stakes were high, those who were far from the trenches wanted the home army to literally bury the opposition. Maybe there is a serious need imbedded in culture for someone to fight on our behalf. Maybe sport is the metaphor of war. The idea was as compelling as it was unsatisfying. I guess I was a pacifist at the time.

So I continued to stroll the earth, an alien among Bulls, Bucs and Broncos. No jersey on my back and no poster on my bedroom wall. I thought I was forever locked out of the mass mind in the bleachers or the sick excitement of gameday. But it is foolish to preclude the possible.

Through the moto path I have come into my fandom. Tomorrow is the great game, the round on which the championship will be decided and I am going thick with anticipation. I don’t know how it happened that I began to invest in strangers a world away. It is an asymmetrical relation; I am fraction in the fanbase. I look upon these men but they, unlike Nietzsche’s abyss don’t look back upon me. So they aren’t traditional mirrors and Aristotle would tell me that they can’t ever be my friends. The investment that I have must be a kind of projection, a choice to pick someone out of the world and set a mirror upon them that I must always hold in place. So that when they win I am relieved and excited. And when they crash I can feel the heat from their leathers as they slide into the gravel trap.

But there are two. Two riders in whom I place myself. And these two are the only championship contenders. I am thus a house divided.

There is the man on the course, who has been trying for a very long time to win this. Who has seen victory taken from him by technicalities and other heartaches. His speed is relentless though it has not always been consistent. He rides close upon his opponents. They say that his bike is maddening to ride, for his settings are extreme on the side of fast turn in. He has always deserved his chances and now, after all of his struggle, he deserves to not have his momentum crushed. He deserves to win. They call him Nitro and upon his helmet there are white and red flames.

There is the rookie from nowhere. The lone star. As though from darkness he has come and his presence cannot be denied. He has been alongside the fastest of the fast since he put wheel to track. A smooth, consistent and unconventional style guides him to victory. In order to meet his challenge a rider has to find the power to dice with god. They call him Elbowz and upon his helmet is his totem, the skull of a bull.

At one point in the season I had a dream. I was riding. I wore a helmet that fit like it was adorned by the skull. But when I took it off, I saw that it was covered in flames. I don’t know who will win tomorrow. But someone has to. And whoever does, a part of me will be defeated. My saving grace is that it is the recovery from loss as well as the victory that makes us great.

So maybe my homeboy wasn’t that off with the war reference. It’s just that, for me, it is not a matter of standing up to a great rival. In the end, my jersey was doomed to represent two teams; I needed to hold up two mirrors to see myself clearly. It is a shame that one of them has to break.

I think next season I will return to pacifism.

The Short Life of Pharmacon X 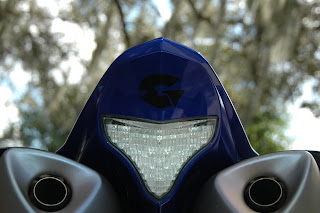 It is said that the movement of history is the transition from the immediate to the mediated. What the philosopher thinks is a direct connection with reality soon becomes a mere report from unreliable senses. The object of one’s love is finally shunned by the idea of love itself, with its cruel and unobtainable perfection. And Dorothy’s wonderful Wizard unfolds as a man among men, dense enough to hide the truth behind a damn curtain. We reach out for the real and grasp only appearance. So much the worse for the real, some say.

I know that when I turn the throttle on the bike I got the other day, it isn’t necessarily my hand that guides my speed. A signal is sent from the twist grip to a computer that takes a survey of the bike- the current rpm, air temperature, intake air pressure-and then tells the engine on my behalf to increase speed in accordance with these conditions. Gone is the cable that simply opens the throttle bodies. I know this. But I don’t feel it when I turn the handle grip and rocket down a straightaway. And because I don’t feel it, I pay no attention to the man behind the curtain.

There is, of course, a great deal to which to give one’s attention on the 2009 Yamaha R1. There is the sound. Since the firing order of the pistons is unconventional, the bike produces a sound unlike all previous R1s. Some say it is like a twin or perhaps even a V8. It sounds to me like Neo’s last scream in the Matrix before awakening in the real world. As though the exhaust note was auto-tuned by T-Pain himself. It is a mystifying sound, one that temps me to not even put in my ear plugs. The engine note combines with the sound of the clutch and the powerful radiator fans and the brakes at work to form a kind of digital cacophony that brings the cyborg out of all of us.

While it still has the visual essence of the r1, it nevertheless has a serious look to it. Like a falcon diving toward its first meal in ages. Two giant exhaust pipes sit under the rear seat just above the wheel. Their heat while in motion makes me feel like Mephisto is just behind me, that each ride is a ride for my soul (which is probably the case.) And what an awesome ride it is.

I just wish I got to enjoy it for longer.

On a warm sunday afternoon, I was met by an SUV that pulled into my path as I cruised without anger or ambition. I applied as much brake as I could before my bike hit the vehicle and transfered the impact through the handlebars to my left wrist, breaking it instantly. I was then thrown nearly 20 feet until I came to an abrupt stop on the tarmac. I sprung up to my feet instinctively, but tumbled to the ground after putting weight on my left ankle proved to be unwise. I lay in the road looking back toward the wreckage of my machine, just visible at ground level through the wheels of the Blazer that halted my harmonious movement. Twisted metal and mangled plastic; an unfitting state for a Tuning Fork.

Almost as unfitting as the blood coming from somewhere inside my glove. Or the dull ache in my booty. Protective gear kept me free of road rash and other major injury. But there could be no doubt that muscle relaxers and gauze would play a role in my future. As the emergency medical personnel inducted me into the institution of the objectifying medical gaze, I heard the driver at fault exclaim to the police that he didn’t see me. Truly, I am an invisible man, I thought.

With a makeshift cast and 15 or so stitches, I left the ER mad disappointed that I would be unable to roll on two wheels for at least six weeks. Friends of mine, whose care I scarcely deserve, suggested that I perhaps I should acknowledge the fact that I was alive, which still gave me a theoretical lifetime to get down on my motorcycle style. Truths such as this are not always comforts, but I will take what I can get.

It is strange how quickly an event can change one’s course. On Friday I rolled out of the dealership on a new status. And on the third day it fell. A kind of Devil Ex Machina that cut through my precautions and safety measures, making even the concrete ground feel groundless. I suppose that a lot of people live in fear of such moments. Still others have no fear until the moment comes and harshly unsettles the world. Perhaps the management of this terror is the true test of being.
at 6:25 PM No comments:

Email ThisBlogThis!Share to TwitterShare to FacebookShare to Pinterest
Labels: Crash, Motorcycles
Newer Posts Older Posts Home
Subscribe to: Posts (Atom)
This is a blog of mostly moto-centric existential reflections. There is also some audio from my radio stylings, quoted passages from literature and rap music and perspectives on Africana thought. Ride with me.