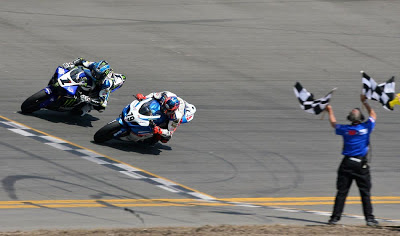 A friend hit me up with a question about camber the other day. This is what I drafted as an answer:

Suppose you are headed down a road toward a left turn. Let's find out how much grip your tires will have given your turn speed.

If the road is completely level, you will have the same grip as when you are riding in a straight line. When you lean over in the turn, the force of gravity will be equal to the centripetal force pushing you to the outside of the turn. This is perfectly fine.

Now,  the road could be banked to the right. This would mean that,  if you were to pour water in the road at the turn, the water would flow to the outside of the turn.  This is negative camber,  or off-camber.

Or,  the road could be banked left. So that the water would flow to the inside of the turn. This is positive camber, which is what you see at racetracks. When you take this turn, the force of gravity is weaker than the centripetal force, since that force is pushing the bike into the incline, which gives the tires more road to grip on to. You are essentially falling into the turn.

Consider the Nascar oval track. It is basically a wall.  You couldn't stand on it without sliding to the inside of the oval.  When those cars come by at speed, they are pressed into the camber of the turn.

If a Nascar racer took a turn on a flat road at the same speed, his car would fly right off the road into the trees. Being able to go faster around a corner is the benefit of positive camber.

Now, in the real world, most roads are in fact mounds, so as to deal with drainage. So, if there is a curve that goes left, you will be off camber on the left turn. But when  you turn around and take the same curve going going right, the camber will be positive.

None of this means much at low speeds. But when the rider is going fast, camber makes quite a difference and is quite easy to feel.

The Green Ninja and I gave some talks recently. It's transcendence on tap, yo.

Email ThisBlogThis!Share to TwitterShare to FacebookShare to Pinterest
Labels: Audio, love, Uganda
Newer Posts Older Posts Home
Subscribe to: Posts (Atom)
This is a blog of mostly moto-centric existential reflections. There is also some audio from my radio stylings, quoted passages from literature and rap music and perspectives on Africana thought. Ride with me.