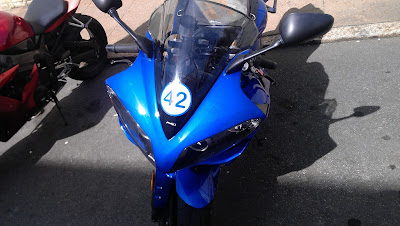 So, I have a number.

This was not intentional. I do not race and I don't need to have a number. There is pretty much nowhere in my riding life where a number would be significant. And yet here it is.

It began with a sticker. My daughter's grandfather is a big fan of Jackie Robinson. He sent some stickers in the mail. The number looked cool enough; I was already partial to it because of the Hitchhiker's Guide to the Galaxy. Then there is also the manner of its proximity to Noriyuki Haga's number in World Superbikes. I am always trying to get close to the demon Haga through fantasy and fancy, so why not?

Then I began to do more research. The Japanese find the number unlucky, says the internet, because the numbers sound like "until death" when one pronounces them. Then there is the Ma'at, the negative confessions (most of which I would not be able to speak if I stood before judgement). Over the course of a day, I what just seemed like a cool sticker to put on a bike began to feel like a meaning.

I can only imagine that this is how Ben Spies felt when he decided on the number 19 for his SBK campaign. I remember reading that he came to feel with certainty that 19 would be his number, that the number began popping up everywhere in his life. So he just knew.

If his tattoos are any indication, Spies is a theist. He is therefore more open to the mystery of the universe and prone to interpret the reoccurence of a number as a kind of sign. I wouldn't say that I am open to the world in the way that I imagine him to be, but I cannot help but notice the degree to which the superstition of the number has entered my zone. I have often used arbitrary symbolism to aid in self-understanding. A row of bikes named Pharmacon and a couple tattoos can attest to this. But the number feels different.

Kant says that the human mind is such that there are questions that, owing to its structure, it cannot help but ask. These are the same questions, which, also owing to the structure of the mind, it cannot answer. The very idea that a number, pasted on a machine, or revealed in numerological transcription of a name (in this case, the name of God), could bring with it a value distinguishable from its absence, is a bit ridiculous. Yet still it turns, says Galileo.

If you get the chance, hit up Google and search for "the answer to life, the universe and everything."